AOL Rolling Out VoIP With e911

Looking to capitalize on its large subscriber base and reputation for making new technology easy to use, America Online (AOL) today introduced Voice over IP

The announcement from the Dulles, Va.-based ISP comes as researchers predict that the number of U.S. VoIP subscribers will jump from 3 million this year to 27 million by 2009.

James Tobin, AOL’s vice president of voice operations, said AOL Internet Phone Service will be heavily marketed to the ISP’s five million broadband customers. But he also sees VoIP as an application that lures dial-up holdouts to upgrade their connection.

“Many people who haven’t moved to broadband haven’t found a compelling reason,” Tobin told internetnews.com. “If you pay for broadband but add Internet telephony you’re going to save money.”

AOL’s offering will cost new customers $29.99 per month for the first six months and $39.99 per month thereafter. The prices don’t include the cost of Internet connection, taxes or the one-time $9.99 charge for shipping costs for the phone adapter.

Like most services it will compete with, the plan includes unlimited local and long-distance calling within the United States and Canada as well as features such as voicemail.

It will also have automatic Enhanced-911 (E-911) service that doesn’t require users to enter their addresses before starting service, something VoIP leader Vonage recently has come under fire for.

Finally, a global calling plan will give users $29.99 per month for first three months, $34.99 per month after, with international rates varying.

With the initial launch of the new service, AOL is also offering members a wireless home network base station at no additional charge for a limited time.

AOL’s broadband traffic, as well as E-911 capabilities, will be handled by Network operator Level 3 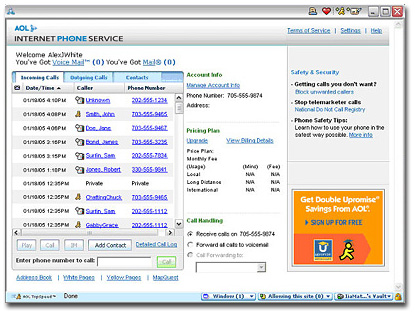