LAS VEGAS. This year marks the 10th annual Pwnie Awards (i’ve been to 9 of them – first year I didn’t know about the event but quickly corrected my error), recognizing the best bugs, the most epic fails and the best researchers in the business. 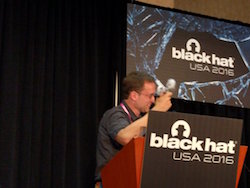 Looking at the more whimsical pwnies – the Pwnie for Best Branding went to Mousejack from Bastille, while the pwnie for the most Overhyped bug went to BadLock.

The backdoor in Juniper’s ScreenOS was the big winner of the night picking up not one but two pwnies – one for the best backdoor and another for epic 0wnage.

The pwnie for best stunt hack truly was no contest as Charlie Miller and Chris Valasek, literally put lives at risk with their 2015 Jeep hack.

While there are a lot of different categories, for me the most noteworthy this year for two individuals that are quite literally living legends. Google Project Zero researcher Tavis Ormandy won the Pwnie for Epic Achievement while Peiter ‘Mudge Zatko won for lifetime achievement.

Ormandy is somehow able to crack any security system, while Mudge, welll…after being hacker that testified before congress, running L0pht and now in the Government to help make us all secure? the man truly is a living legend and deserves every accolade he receives.

Oh and if you want to see Tavis Ormandy pick up his shiny Pwnie – here you go: