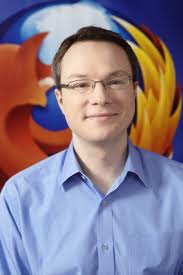 From the ‘He’ll be Back’ files:

Shaver has a long and colorful history with Mozilla, going back to its original home at Netscape and AOL. The last I had heard was that Shaver was the VP of Engineering at Mozilla – a position he inherited after Mike “Schrep” Schroepfer left for Facebook in 2008. Mozilla’s PR team however has advised me that he is currently Vice President of Technical Strategy.

In any event, he’s leaving and we don’t know who will be replacing him (if anyone can).

“I’ve decided that it’s time for me to move on from the Mozilla Corporation, where I have enjoyed 6 years surrounded by incredible people doing incredible things on (and to) the web. I haven’t yet decided what’s next, though I have some exciting opportunities to explore,” Shaver wrote in a blog post.

Mozilla sent me the following statement about Shaver’s resignation:

“Mike’s made tremendous contributions to Mozilla over the past decade in a variety of technical and executive leadership roles. He’s left a legacy of outstanding managers and leaders across the organization. While we’ll miss his day-to-day contribution, we look forward to his continued involvement as a long-standing and respected leader in the Mozilla project.”

This isn’t the first time that Shaver has left Mozilla, as a project anyways.

Back in the year 2000, Shaver left the then fledging Mozilla.org project , that at the time was operating within AOL’s Netscape division. Yeaah, I know Mozilla of the year 2000 and 2011 are two very different beasts, part of that is due to Shaver’s influence.

Personally, I don’t think this is the last we’ll see of Shaver as a Mozilla staffer. Mozilla is a project that creates a family atmosphere amongst its team.

In any event, best of luck to you Mike — wherever your path  takes you.