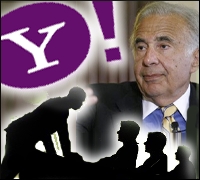 Carl Icahn, the billionaire investor who made so much trouble for Yahoo last year, has spoken out in favor of a deal with Microsoft, which reportedly could be announced as early as this week.

“I’ve been a strong advocate of getting a search deal done with Microsoft,” Icahn told Reuters. “It would enhance value if a deal got done, because of the synergies involved.”

Icahn won himself a seat on Yahoo’s board last year after amassing millions of shares and threatening a proxy war to wrest control of the company of then-CEO Jerry Yang and Chairman Roy Bostock to force a deal with Microsoft.

Essentially, the deal would be an advertising partnership, likely involving Microsoft paying billions up front and more down the road in a multi-year play for Yahoo’s search business.

Pooling their resources would, in theory, better position Microsoft and Yahoo to compete with Google for the money advertisers spend on search ads. Currently, both suffer from a market-share problem. By the latest comScore rankings, Google performed 65 percent of all U.S. search queries, compared to Yahoo’s 19.6 percent and Microsoft’s 8.4 percent.