Wim Coekaerts first got a job working as a support analysts for Oracle in Belgium in March 1995. He ended up moving up the ranks at Oracle, leading Linux and virtualization efforts, until he left in March 2016.

I personally was very surprised when Coekaerts left in March, not just that he left Oracle, 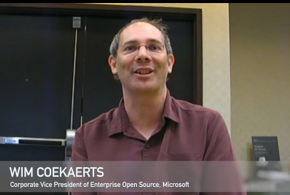 but that he left Oracle to join none other than Microsoft. I got the opportunity to catch upwith Coekaerts in Toronto this Summer where he delivered a keynote at the final LinuxCon North America event ever (next year the event is being re-branded as the Open-Source Summit).

At Microsoft, Coekaerts was set to help guide the enterprise open-source software vision, and it’s a mission that he was engaged in for eight months.

In October, he officially re-joined Oracle as SVP of Software Development.

“Made tough call to leave Microsoft,” Coekaerts wrote in a LinkedIN update. “It was a personal decision and from my short time here, I saw a company that really does love Linux and has a bright future in open source.”

I personally wish Wim, the best of luck in his return to Oracle, I’m sure they’re thrilled to have him back.