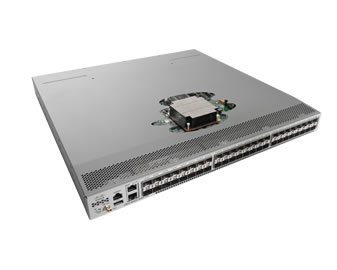 Cisco has announced its lowest latency switching platform ever with the Nexus 3548. The new Nexus is a 1RU 10 GbE platform that combines Cisco’s NX-OS operating system with new custom built silicon to deliver ultra-low latency.

At the core of the Nexus 3548 is a new solution that Cisco calls, Algo Boost.

Rajan Panchanathan, dir. of product management in Cisco’s Data Center Group, explained to EnterpriseNetworkingPlanetthat Algo Boost isn’t just about low latency t’s also about providing tools and visibility into what is going on in the packet stream. To that end, the Nexus 3548 with its complement of visibility of control features is able to deliver latency at a record low of 190 ns. “

Algo Boost is a collection of technologies that reduce latency and provides a rich analytical framework for deep visibility,” Panchanathan said. “As well there is s intelligent traffic layering that allows the platform to be used for digital forensics and troubleshooting.”

Algo Boost is technology that involves both hardware and software. On the hardware side, Cisco has developedCisco Algo Boost ASIC custom silicon in the form of a new ASIC that is a core component of Algo Boost. That ASIC is being first made available on the new Nexus 3548 switch.

Read the full story at EnterpriseNetworkingPlanet:
Cisco Goes After Low-Latency with New Nexus