Does the Oracle SPARC Update Leave Linux Behind?

From the ‘Truth in Advertising’ files:

Oracle updated its SPARC chips and servers yesterday. All of it 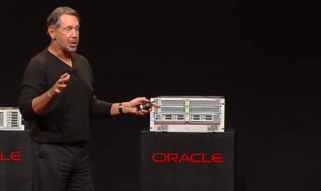 During the live event, Oracle CEO Larry Ellison proclaimed the new SPARC servers to be the fastest computers in the world.

It’s a claim we’ve heard before from him – in reference to his company’s x86/Linux based Exa-class systems.

Ellison said during the event that, ‘the ultimate software optimization is hardware’ – again something that we’ve heard in reference to Oracle’s engineered systems, which are all x86/Linux.

John Fowler, the former Sun executive who is now enjoying a re-birth at Oracle praised Ellison for unleashing a new era of innovation for SPARC – which is a hardware line that many people (myself included) did not think would survive at Oracle.

So what’s going on? Are the Exa-class x86/Linux systems the top-end for Oracle? Or is it the SPARC/Solaris UNIX combo?

Truth is that the answer will depend on who you ask and when.

There is no question that Oracle has done right by former Sun customers and extended the innovation curve for them in terms of software and hardware. If you’re a Solaris/SPARC user, these are happy days indeed.

On the hand, there are a lot of people that never bought Sun/SPARC/Solaris and there are ALOT of Linux shops out there. Oracle has also invested heavily in Linux and its Exa-class systems.

But that’s not the point.

I don’t think Oracle is pushing its Linux customers to move to Solaris or vice-versa. For those already in the Solaris camp (and hey if you stuck with Solaris this long…), I suspect they aren’t moving. For those that have been running Linux, not likely they’ll want to shift to Unix (many of them likely fled from Unix at some point).

Oracle’s Linux roadmap and product evolution is solid and the fact that Larry Ellison stood on a stage yesterday to announce the ‘world’s fastest computer’ as a Unix machine, doesn’t make Linux any less relevant to Oracle, or anyone else.

Sean Michael Kerner is a senior editor at InternetNews.com, the news service of the IT Business Edge Network,  the network for technology professionals Follow him on Twitter @TechJournalist.