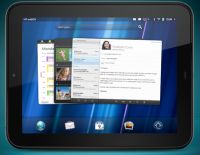 From the ‘Open Source Lifeline’ files:

The day that webOS was officially killed was a shocking one for me. I remember being at LinuxCon, and it was just a few short hours after an awesome keynote from HP on webOS that the axe fell.

Now HP is giving webOS a second life – by open sourcing it.

“webOS is the only platform designed from the ground up to be mobile, cloud-connected and scalable,” said Meg Whitman, HP president and chief executive officer said in a statement. “By contributing this innovation, HP unleashes the creativity of the open source community to advance a new generation of applications and devices.”

No, we don’t know if HP will also seed a development community.

No, we don’t know where this project is going – ie. to Apache or just as an HP project.

Really we don’t know much, other than the fact that HP has announced their intention to open source the technology. This is kinda like the tech equivalent of a Hail Mary pass, HP doesn’t really know so they’re throwing the tech out there.

That’s a good thing. Without even the Hail Mary, webOS was dead. With the ‘promise’ of open source webOS, someone could theoretically keep it alive.

That said, without a strong community, I suspect that people will just take bits and pieces of webOS to use for their own efforts. Assuming licenses and IP issues permit that…

As proprietary tech, webOS and the TouchPad were a dead end, no there is a glimmer of hope. But it is just a glimmer. HP has not fully committed to webOS or tablet development and without them it’s questionable if this effort will advance. Sure it will survive, but in the mobile world, survival isn’t the name of the game — evolution is.

Sean Michael Kerner is a senior editor at InternetNews.com, the news service of Internet.com, the network for technology professionals. Follow him on Twitter @TechJournalist.

Sean Michael Kerner
Previous articleSay What? Top Five IT Quotes of the Week
Next articleBlue Coat Going Private for $1.3 Billion