Mars Curiosity. Where is Linux? 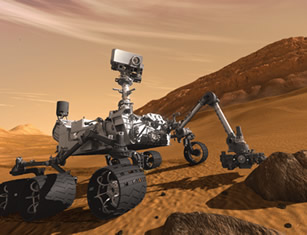 From the ‘Real Time Linux’ files:

With all the excitement about the Sunday AM (ET) landing of the NASA Curiosity rover on Mars, I’ve felt that something has been missing.

I’ve seen multiple press releases from vendors all highlighting how their tech is helping NASA.

One of the releases I got was from Intel’s Wind River division. Wind River has a robust embedded Linux operating system offering.

However, that’s not what they sold to NASA for Curiosity.

Now I understand that real time determinism is something that a spacecraft needs, but I would have thought that’s also something that Linux now can provide. Apparently that wasn’t the view of either Wind River or NASA, two groups that both have strong Linux experience.

To be sure, there are no doubt teeming numbers of Linux servers sitting behind the scenes helping to crunch all the Hadoop loving Big Data that Curiosity will send from the surface of Mars. But for whatever reason, Linux wasn’t the choice for the primary embedded systems that NASA has on Mars today.

So if you happen to work at Wind River or know someone who does (that will talk, or hey comment here), please let me know why Linux wasn’t the right choice for Curiosity.

Why Not Buying ARM May Be Better for NVIDIA