OpenStack Glance Gets New Glint for Replicated and Distributed Images

from the “C’est Bonne!’ files:

PARIS- At any given OpenStack Summit that I attend I’m always looking for the proverbial needle in the haystack – that one project that I’ve never heard off before that offers new promise.

At the OpenStack Summit in Paris I found once such effort – know as Glint. 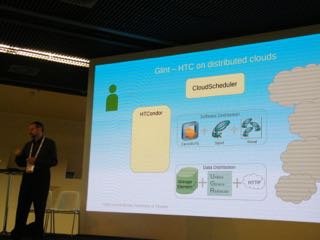 Glint is not an official OpenStack project (yet) and it may never be one either. Glint is an effort that comes out of the High Energy Physics Lab at the University of Victoria in British Columbia Canada

Colin Leavett-Brown Research Assistant at the University of Victoria explained that his University is already now using Glint across three continent to leverage the power of 25 clouds and be able to synchronize images across all of them.

Glint, used Glance the OpenStack image service as the base and provides a new system by which images can be distributed and synchronized. It’s a project that has not yet been submitted to become an incubated effort at OpenStack, though Leavett-Brown said he’d like it to be.

That said, during the Q&A that followed his session, as luck would have it, a core Glance contributor said how interested he was in Glint. So who knows, maybe we’ll see Glance gain some Glint sooner, rather than later.