SAP is a software company few folks would associate with open source. SAP Sybase CTO Ifran Khan would like to change that perception, however.  Khan took the stage at the Red Hat Summit in Boston this week, detailing SAP’s take on Linux, open source and Big Data.

Khan began his keynote with a staggering statistic. He noted that 65 percent of the world’s GDP will touch an SAP back-end system at some point. Like other long-established companies with large portfolios of on-premise software, SAP is now moving its applications to mobile and cloud environments. The key, Khan stressed, is doing so in a way as non-disruptive as possible for customers.

At the core of being non-disruptive is the issue of customer choice. “We don’t assume that we will cart in a box that has the prefix Exa on it to solve all problems,” Khan said. 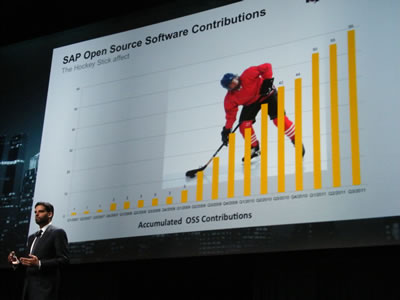 Khan’s comment was a shot at Oracle’s Exa-class systems, including the Exalogic, Exadata and Exalytics all-in-one hardware, software, storage and networking boxes.

While SAP cannot be considered an open source company in the same sense as Red Hat, SAP has made strides in open source involvement and adoption.

“We have gone from preserving everything in house to voluntarily going open source,” Khan said. “We truly believe in open now.”

Khan noted that SAP is making open source contributions in lots of areas including the Eclipse development community. The overall direction of SAP’s open source involvement has been progressing on a hockey stick growth curve, which Khan exhibited during his presentation.

Read the full story at EnterpriseAppsToday:
SAP: We Love Linux