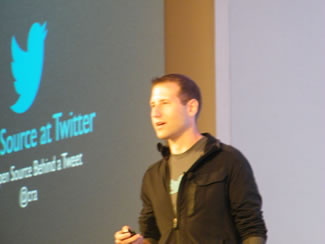 Virtual Machine) and the Scala programming language.  Chris Aniszcyzyk, the open source manager at Twitter, noted that Twitter was first built with the open source Ruby on Rails framework, but ended up moving away from Rails for performance reasons.

Twitter uses Git as its source code version control system and the Jenkin Continuous Integration project for builds. On the storage side, Twitter uses MySQL for long term data storage and Hadoop for Big Data analytics.

Aniszcyzyk stressed that Twitter isn’t just a consumer of open source technologies, it also contributes, too.

At the the top of Aniszcyzyk’s list of Twitter’s open source contributions is the Bootstrap HTML framework. Bootstrap is routinely one of the most popular project on the GitHub open source code repository.

Overall, Aniszcyzyk says that Twitter now has over 80 projects on GitHub. Rather than list them all alphabetically, he detailed the anatomy of how a Tweet is sent and delivered using open source tech

Read the full story at Datamation:
The Open Source Technology Behind Every Tweet