Fabless semiconductor company, RFaxis, announced Thursday the debut of its first two chips, the RFX2401 and the RFX2402. According to RFaxis, both chips offer a replacement for traditional RF front-end modules, combining all the functionality into a single-die, single-chip solution for Bluetooth, Zigbee, and WLAN applications.

The company says the RFX2401 and RFX2402 are the first and only fully integrated, single-chip, single-die Bluetooth/Zigbee RFeICs (Front-end Integrated Circuit) on the market.

“In the midst of a burgeoning wireless market and at a time when the economic climate demands efficient expenditures, RFaxis was founded with one mission in mind: to create highly integrated semiconductor solutions that will reduce cost while simultaneously boosting performance,” noted Mike Neshat, president and CEO of RFaxis in a statement Thursday. “We have effectively reduced the complexity of wireless designs, making our breakthrough technology a compelling value proposition to OEMs.”

Nokia today opened its mobile application store both here and overseas with an eye to stealing share from players like Apple–despite initial reports of performance issues and confusion over availability in the U.S.

The Ovi Store consolidates Nokia’s existing content services into a one-stop-shop for free and paid content. It also advances Nokia’s vision for its larger array of mobile services, which it’s also been marketing under the name Ovi–the Finnish word for “door.”

Despite frequent efforts to ramp up Ovi, it’s thus far failed to gain the same traction as mobile services from Google, Yahoo and individual carriers’ sites. In more recent months, as Apple’s iPhone has emerged on the scene as a dominant force in mobile apps, the device’s App Store has also eclipsed Nokia’s efforts, establishing itself as the player to beat in downloadable apps. More details at InternetNews.com.

Aruba Networks’ new 600 Series Branch Office Controllers (BOCs) was the winner of the 2009 Best of Interop Awards in the Wireless and Mobility category.

Designed to be a “branch-in-a-box” solution for offices with up to 256 users, Aruba says its BOCs offer a broad range of WAN connectivity, network-attached storage, gigabit Ethernet, power-over-Ethernet (PoE), Express Card, and USB options, and an integrated 802.11n Wi-Fi radio.

More than 160 products vied for recognition as Best of Interop award winners. The Wireless and Mobility category was judged by Michael Brandenburg of InformationWeek and David Molta of Syracuse University.

In addition to the 600 Series Branch Office Controllers, the VBN solution includes new software for data center-based Aruba Controllers, and two new families of wired and wireless RAPs. One of the new RAPs, the RAP-2, has a U.S. list price of just $99, which Aruba says makes it the least expensive, centrally managed enterprise branch networking solution on the market.

Microsoft announced Tuesday that its upcoming My Phone data synching service for smartphones running Windows Mobile 6.0 and later has entered broad public beta testing. Previously, My Phone had been in a limited beta test with selected users.

Set to launch when Windows Mobile 6.5 phones start to appear later this year, Microsoft’s My Phone will provide services similar to those in Apple’s MobileMe, such as synchronizing and backing up data between the users’ phone and the My Phone Web site, where the data is stored in the user’s cloud service.

My Phone debuted at the Mobile World Congress 2009 in mid-February in Barcelona, Spain, along side Microsoft’s coming Windows Marketplace for Mobile App Store competitor.

The service will let users manage the information on their Windows Mobile phones via a Web browser, according to statements on Microsoft’s My Phone site. For more, read the full story at InternetNews.com.

Amid Yahoo!’s efforts to strengthen its hand in mobile search, it’s paring down its smartphone application development efforts, enabling it to concentrate instead on apps for the Apple iPhone.

Beta testers of Yahoo!’s mobile Java-based app this week received an e-mail stating that Yahoo! “ceased development” of the application and that, for now, the company will “focus efforts on the newly launched Yahoo! Mobile experience for browsers and for the iPhone,” according to reports.

Yet Yahoo! officials said that the company isn’t entirely abandoning the effort to create mobile apps for other platforms, and reports indicate that it may be planning to create one with a different design than the one it just scrapped.

Yahoo! spokespeople did not return requests for additional comment on the news. More details at InternetNews.com.

Most of the E911 technology in today’s wireless phones use a form of mapping called radiolocation, or finding location through the use of radio waves, but the operator doesn’t get access to the caller’s physical address. This is a critical short coming for those carriers that do not have a mapping system for those unable to tell an operator their location due to the nature of the emergency

This changes with the new Vixxi system, as it allows operators to get specific location information without a mapping system.

Reverse Geo-Coder works by obtaining a device’s coordinates from either its GPS or PDE (position determination equipment) signal, working both indoors and out, and reverse-codes that point into the closest physical address of the caller and sends it with the data record to public safety answering points.

For more on Wi-Fi and geolocation, read:

EnterpriseVoIPPlanet reports that a recent report forecasting more than 50 percent of mobile calls using end-to-end voice over IP by 2019 “should be a wake-up call for wireless carriers, who will soon be watching cell phone users slip away. For enterprises already migrating to IP PBX, the news is prompting a second look at ways to integrate its employee communications, both in the office and on-the-road.”

“‘Large vendors are taking a new look,’ said Ed Cox, marketing vice president at Varaha Systems, a Dallas, Texas-based developer of the fixed/mobile convergence product uMobility, which links cell phones and offices through a Wi-Fi VoIP network rather than a more expensive cellular carrier when the Wi-Fi network is available.” 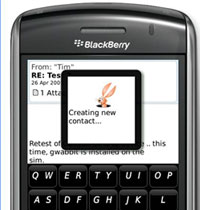 Technicopia, publishers of Gwabbit, positions it as the world’s first automatic e-mail contact manager (ECM) for a hand-held device. Todd Miller, president and founder of Technicopia, told InternetNews.com that the BlackBerry version is already “a very advance beta” and might even ship a bit sooner than May 25.

Gwabbit (rhymes with “grab it”) is designed to automatically search and identify signatures embedded in e-mails on a BlackBerry device and adds or updates that information to the Blackberry address book in a single click. For those users syncing their contacts to Outlook, Gwabbit’s automated capture is designed to keep contacts updated globally.

Basically, Gwabbit simplifies what is usually a much longer manual, copy-and-paste process to update contact lists in Outlook or on a BlackBerry device. For more details from InternetNews.com, click here.

Proving that even popular technology isn’t immune from the recession, IDC research released today said the mobile phone market took a pretty good hit in the first quarter of 2009.

Although shipments in the first quarter of a new year are typically lower than the quarter preceding it, since it includes the holiday gift giving season, IDC said this decline was especially sharp due to such factors as weak end-user demand, currency volatility, and lack of credit for merchants as consumers and the supply chain adapt to the recession.

IDC analyst Ryan Reith said the numbers were only “a bit of a surprise,” since the company had forecast a 13 percent drop about a month ago. He says the sales problems were particularly acute in North America and Western Europe, where 85 to 90 percent of the population already has handsets. Read the full story at InternetNews.com.

According to a press release issued today, “Vopium’s award-winning technology takes advantage of 3G, GSM, Wi-Fi, and GPRS networks and doesn’t limit users to just using Wi-Fi hotspots. Vopium automatically re-routes calls via the cheapest available route, ensuring that customers are always able to save money when calling international numbers. Once downloaded, the Vopium application on BlackBerry App World seamlessly integrates with the address book. It intelligently recognizes international numbers and automatically re-routes calls without the need for user input. When an international number is dialed, the call is made using the cheapest method available while also preserving the highest level of call quality.”

Vopium also offers a VoIP app for iPhone and is compatible with more than 500 mobile devices across all OS’s, including Windows Mobile, Symbian, and Java.

Users that download and register Vopium from BlackBerry’s App World, will receive 30 minutes of free calls and 30 text messages (SMS). To view a step-by-step registration guide for the BlackBerry, visit http://vopium.com/visualguide-blackberry

Vopium Wi-Fi users can call each other around the world for free.