Cons: limited support for peripheral devices and/or your own software; no cheaper than an entry-level Windows notebook after factoring in two years of subscription costs.

The name conjures up (at least to us) images of some kind of evil galactic overlord, but fortunately Zonbu is not here to enslave us, but to offer freedom from much of the hassle associated with owning and maintaining a conventional (read: Windows) notebook PC.

Zonbu’s notebook — also known as the Zonbook — runs Linux rather than Windows and is sold with an accompanying subscription service. The pricing model is similar to that of the cellular phone industry. In other words, the longer you commit to maintaining your subscription, the less you have to pay up front for the hardware (the company also offers a desktop model under a similar arrangement).

A Zonbu subscription costs $14.95 monthly and gets you automatic and transparent updates (for operating system, applications, and drivers), automatic data backup to online storage, and remote access to your data from Zonbu’s Web site. Zonbu also offers subscribers e-mail and phone support, and should your Zonbu hardware go south on you, the company says it will ship a replacement unit the same day.

The Zonbook can be had for a mere $279 when you commit to a two-year subscription commitment, but the price rises to $379 with just a one-year commitment. If you’d rather go month-to-month, you pay the full notebook price of $479. (Subscription fees are always paid monthly, even under the one- and two-year plans.) 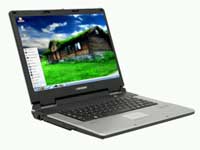 The size, weight, and specs of the Zonbook (which is built by Everex) are on par with what you’d get with a conventional entry-level notebook. At 14.1 x 10.7 x 1.5 inches and 5.3 pounds the unit isn’t exactly small or light, but neither is it especially large or unwieldy. Zonbu rates the unit’s lithium-ion battery at 2.5 – 3 hours of life, and we got within that range during our time with it.

The Zonbook is powered by 1.5 GHz Intel-compatible Via C7-M processor and offers fairly modest amounts of RAM and hard disk space at 512 MB and 60 GB respectively. There are three USB ports, a DVD-ROM/CD-RW drive, and built-in wired Ethernet plus 802.11g Wi-Fi. Topping it all off is a 15.4-inch widescreen display capable of 1440 x 900 resolution (plus a VGA connector for use with an external monitor).

When you turn on the Zonbook, it takes a minute or two before it finishes booting and you’re able to log in to your Zonbu account. (Given how long Windows can take to load, we were hoping for a bit more alacrity here.) If no wired network connection is detected, a wizard will let you locate and connect to available WLANs — we were able to connect to a WPA2-encrypted network with no difficulties.

Operating System and Applications Once logged in, you’re presented with Zonbu’s operating system desktop. Like many of the more user-friendly Linux variants, this one looks and feels very much like Windows, so suffice it to say if you’ve used Windows for more than an hour you’ll probably acclimate to the Zonbu without much difficulty.

For tackling daily computing chores, Zonbook comes with a host of applications preinstalled, many of which are familiar open-source tools that are also available on Windows, such as the Firefox Web browser, OpenOffice.org productivity suite (a half dozen applications including word processing, spreadsheet, and presentation graphics that work with most Microsoft Office files), and Pidgin multi-protocol instant messaging software. There are a number of other programs too, including Skype, GNUCash (a Quicken-compatible personal finance manager) and for those not using Web-based services, an e-mail client called Evolution.

In addition to workaday computing tasks, the Zonbook is also adept at handling multimedia content like photos, music and video through a host of built-in utilities. We didn’t have any problems playing things like MP3 audio files, JPEG images, MPEG videos, or recorded DVD movies. In addition to basic multimedia playback tools, the Zonbook comes with software to organize (and often edit) various types of content. (It’s worth mentioning that the Zonbook has only a single mono speaker, though you can listen to stereo sound by connecting headphones to the unit’s standard 3.5mm audio jack.)

Generally speaking, the applications you get with Zonbook are roughly equivalent to those you’d find built into or used with Windows, and as with the Zonbu OS itself, the learning curve required by the bundled software should be minimal for most. But while the interface and capabilities are similar to popular Windows-based applications, they’re not necessarily identical, so in some cases not all expected features will be available or work the same way. (Zonbu offers money back guarantee within the first 30 days.)

As mentioned above, the Zonbook sports a trio of USB ports for connecting various peripherals such printers, Web cams, and. But because this is Linux and not Windows, you’re not free to use any device you want. Instead, your choices are limited to those with driver support within Zonbu’s OS, and limited availability of hardware drivers is a notable weakness of most flavors of Linux.

To simplify peripheral selection, on its Web site Zonbu maintains a list of compatible devices in various categories. While there’s essentially full support for things like keyboards, mice and USB storage devices and decent support for recent and name-brand printers, there’s no support for devices like scanners and Bluetooth accessories. As it turns out, our HP OfficeJet 7310 was on the compatibility list, and we got it working with the Zonbook with no difficulties. The catch– although the 7310 is a multifunction device (printer/scanner/fax), it’s only supported as a printer.

Subscription FeaturesZonbu provides a decent amount of value and convenience for your subscription fee. For starters, our unit was updated with a new version of the operating system within 24 hours of turning it on for the first time. And because Zonbu’s operating system is Linux rather than Windows, it’s not in the crosshairs of every malevolent malware writer on the Net, if for no other reason than Windows is far more popular. That saves you from having to buy, install and maintain any add-on security software like firewalls, anti-virus and spyware scanners and soon. (The Zonbu OS includes a built-in firewall that needs no tweaking because all the software is pre-installed.)

Zonbu’s automatic backup feature worked without a hitch — as we began filling the notebooks hard drive with our own data files, they were invariably uploaded up to the online storage account without any input from us (there was more than enough online capacity to accommodate the Zonbook’s 60 GB hard disk).

You can get remote access to your backed-up files by logging into your Zonbu account from any Web browser, and there’s no plugin to install first. Similarly, if you’d like to make some of your files available to others, you drop them into the Public folder on your desktop and they’ll be available via a personal public page hosted off my.zonbu.com (files published this way are available to all comers. However, you can’t provide specific individuals access to particular files.

The Bottom LineSo how does Zonbu compare to a conventional Windows-based notebook? An entry-level Windows notebook with specifications similar to the Zonbook can be had for about $600 these days. (We won’t assign an additional cost to software since there’s tons of free software available in virtually every category, and many of the Zonbu applications — like Firefox and OpenOffice — are available for Windows as well.)

By contrast, the $279 Zonbook will have cost about $640 after two years worth of subscription payments, so in the long run the cash out of pocket is pretty much a wash. But while the Zonbook won’t necessarily save you big money, it can save you something almost as valuable — time and aggravation — by eliminating the need for to find, install, configure and update all kinds of software on your own. It’s this convenience, combined with the data backup and remote access (that you’d likely have to pay for separately in the Windows world) that will make the Zonbook an attractive option for some.

While Zonbu’s approach will not satisfy anyone who likes the capability to tinker with their computer or needs unfettered access to the widest possible range of software and peripherals, for those that are looking for a reasonably priced, competent and low-hassle notebook computer Zonbu deserves a close look.