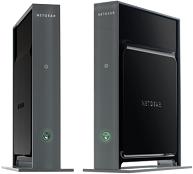 If you’ve got networked audio/visual devices like game consoles, set-top boxes or other devices that require speedy and lag-free wireless connections, setting up a draft-802.11n network is a no-brainer. Even better, making it the 5 GHz variety nets a greater number of available channels and less potential interference from other wireless devices.

For those that would like to take advantage of 5 GHz 802.11n without the potentially considerable expense or hassle of having to replace or reconfigure their existing Wi-Fi devices, Netgear’s $199 WNHDEB111 HD/Gaming 5 GHz Wireless -N Networking Kit provides an easy way to do it.

The WNHDEB111kit contains a pair of identical WNHDE111 wireless bridge devices, which have a clean, vertical design about 9-inches tall and finished in a combination of matte and glossy black plastic. The WNHDE111’s Spartan front bezel offers a single combination power/status/activity indicator, along with a WPS (Wi-Fi Protected Setup) configuration button. On the back of the unit is an on/off button, a pair of Ethernet ports, and a switch that toggles between the two operating modes—Access Point (AP) and Bridge. A third mode, Auto, lets the unit automatically choose one of the two modes, depending on how the device is being used.

When the WNHDE111 is connected to a router via Ethernet it’s in AP mode and acts as a 5 GHz 802.11n access point. In turn, the other WNHDE111—in bridge mode and wirelessly linked to its twin—is used to connect client devices, also via Ethernet. Thus, the WNHDEB111 effectively lets you set up a 5 GHz draft-n WLAN that will co-exist quite happily with an existing 2.4 GHz b/g network. It is impervious to interference from most household wireless devices.

Getting the WNHDEB111s up and running proved to be quite easy. With both units set to Auto mode, we connected one to a free Ethernet port on the installed wireless router (coincidentally a Netgear WPN824, but a router from any manufacturer will work just as well) and powered up. We then placed the second unit in a living room home entertainment center and connected it to a TiVo Series 3 DVR and an Xbox 360. Within a minute of powering up the second WNHDE111, its front panel indicator light went from blinking to solid, indicating a good link. Successful attempts to log into Xbox Live and connect to TiVo servers confirmed this.

A minor gripe about the WNHDE111 is that its pair of (100 Mb) Ethernet ports limit you to two directly connected devices on the bridge unit, and it’s not hard to envision many users wanting three or more for various devices. One plausible example is a TiVo and a pair of game consoles. You can connect additional devices to a WNHDEB111 by adding an inexpensive stand-alone LAN switch (for as little as $10), but it’s not ideal since it is an extra device taking up space, it presents more cabling, and another power outlet is consumed. We’d much rather see the WNHDE111 come with an extra LAN port or two.

Both units were configured by default as DHCP clients and thus automatically received IP addresses from our WPN824, but the AP can act as a DHCP server as well. After logging into the WNHDE111 access point via browser we could view and adjust wireless link settings for the pair. The units had been auto-configured for a high-performance, high-security connection — mixed-mode 802.11a/n with auto-channel selection, WPA Personal security with a 13-digit pre-shared key and Wireless Intelligent Stream Handling (WISH) enabled. WISH provides QoS by letting the WNHDEB111 prioritize streaming audio and video sent via HTTP, a Windows Media Center PC, or specified source.

Since the WNHDE111 access point supports 802.11a, in addition to the bridge and other 5 GHz 802.11n devices, you can also connect older 5 GHz-capable devices to it. We had no problems seeing or connecting to the WNHDE111 with a four-year-old Dell notebook using its integrated 802.11 a/b/g.

The WNHDEB111 acquitted itself well in terms of performance, as measured by network performance measurement utility JPerf 2.0. We tested from two different locations. First from a bridge in a living room setup, separated from the AP unit by one wall and approximately 20 feet. Then, with the bridge unit in a back bedroom about 50 feet away with four walls in between. In the first scenario, the WNHDE111s delivered excellent throughput of 80.2 Mbps, compared to the mere 18.6 managed by our baseline unit, an 802.11g bridge. The performance of the WNHDEB111 waned only slightly at the longer, more obstructed distance, turning in 75.9 Mbps.

We also attempted to tax the WNHDEB111 with some real-world activity and streamed a 1080p video clip from a Media Center PC to an Xbox 360, then transferred a large HD video file from a TiVo Series 3 to the PC and streamed video from a Slingbox to the PC all at the same time. This resulted in occasionally stuttered playback over the g link, but the WNHDEB111 handled these simultaneous bandwidth-munching chores without any problems.

The WNHDEB111 wasn’t necessarily a panacea for all of our bandwidth woes, however. For example, transferring a 5.7 GB recorded program (65 minutes, 1080i resolution) from a TiVo Series 3 to either a PC or another TiVo box took 61 minutes via 802.11g — barely better than real time. The same transfer took almost as long—57 minutes—over the WNHDEB111. The WNHDEB111 isn’t to blame here; there clearly seems to be performance ceiling with the TiVo’s ability to transfer files, but it serves as a reminder that bottlenecks can sometimes be present on the devices used with wireless networks rather than the networks themselves.

Not cheap, but worth the price

At $199, the WNHDEB111 is on the pricey side, and if you want to network devices in two locations—say both a living room and a bedroom—it will be pricier still, since you’ll need to ante up another $99 for a third unit. Then again, the alternatives, something like a HomePlug AV or similar powerline networking kit (which makes use of AC wiring), for example, will as expensive (or nearly so), less flexible (no wireless access), and likely not as easy to set up.

If you’re looking for the simplest possible way to give certain devices a speedy draft 802.11n link to your WLAN, the Netgear WNHDEB111 HD/Gaming 5 GHz Wireless-N Networking Kit does the job nicely.

For help and tips on Wi-Fi and gaming, read “Wi-Fi Planet Guide to Video Gaming Systems,” and “Ask the Wi-Fi Guru, Episode IV.”