From the ‘Goodbye Godzilla’ files:

Since 1998, Mozilla’s brand has been associated with its godzilla-like dinosaur logo. While other company’s (and browsers) have come and gone Mozilla’s dinosaur has remained, 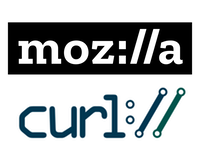 Mozilla officially debuted its new logo, after an intensive open process that helped to select the new brand. Surely the new logo is a step forward away from the archaic dinosaur, but it’s not entirely a unique type of brand-mark either.

The open-source cURL project has a somewhat similar logo in fact.

Not that there is anything wrong with Mozilla basing its’ new logo on curl’s, but it’s unfortunate that Mozilla didn’t choose something more – unique. That said, the new logo is a better reflection of the web mission that Mozilla has always had – even though Mozilla has cancelled more projects in its time, than most companies will ever start (FirefoxOS anyone?).

I for one will not miss the dinosaur logo, though of course a year from now I suspect I will feel a bit more nostalgic for it, much in the same way I feel about the original Netscape logo. The Mozilla dinosaur is now extinct and it’s time for us all to move on.