When you’ve got files you need to access on several computers but no central location — like a server or NAS device — on which to store them, it’s not uncommon to turn to Windows built-in file sharing feature. But this approach is far from ideal since it often requires fiddling with firewalls to get it to work properly and it’s limited to use on a LAN (at least without extra measures like a VPN). 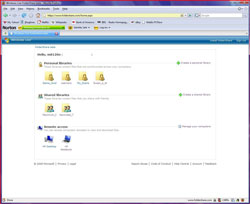 As you run the FolderShare installation wizard you’re prompted to create a user account and are given the Windows Live moniker, you’d think that you could log in with an existing Windows Live ID. That’s not the case, however, because Microsoft purchased FolderShare from another company several years ago and has apparently not yet fully integrated it into the Live infrastructure (though support for Live IDs is planned).

Once the software is up and running on each of your computers, you use the FolderShare Web site rather than the utility itself to select folders to be shared. These folders are called Personal Libraries, and setting them up is easy via the browser-based interface (which incidentally works just fine with Firefox).

After choosing an available system, you can browse its entire folder structure with the special folders — Documents, Favorites, Music, Pictures, and Desktop — at the top of the list. (You can’t access mapped network drives, however.) When you select a folder and a destination system, the SSL-encrypted data transfer immediately begins, and how long this takes depends on whether the systems involved are connected via LAN or a significantly slower Internet connection. In the latter case, initial transfers/synchs can take some time, especially with large folders.

FolderShare does impose a few limitations worth mentioning. You can have a maximum of 10 Personal Libraries with 10,000 files in each, and individual file sizes are limited to 2GB, though most people probably won’t bump up against these limits. Also, you can’t use FolderShare to share individual files, and when selecting folders the files they contain aren’t shown, which eliminates a point of reference if you’re not exactly sure where the information you’re looking for is stored. (You can get around this using the Remote Access feature we discuss later, but it’s a little inconvenient.) Another complaint is that the folder names displayed on the FolderShare site are truncated down to about nine characters, so you may have to double-click some of them to view the full labels.

Once a Personal Library is established between computers, any files that are added or changed are synchronized across all systems as long as they’re connected to the Internet. If changes occur while a system is offline, the synchronization takes place whenever the connection is re-established.

FolderShare’s capability to handle synchronization conflicts is limited. If the same file changes on different systems while one of them is offline, at synch time FolderShare will simply retain both versions, renaming one of them to reference the user and system of origin. That’s infinitely preferable to say, keeping only the one with the most recent time/date stamp, but it does leave it up to you to manually consolidate the two files or figure out which one to keep.

Spread the wealth (of information)

FolderShare doesn’t limit you to just sharing folders among your own computers — you can also use it to share folders with others, like friends, family and colleagues. These Shared Libraries can either be created from existing Personal Libraries or set up separately.

To grant someone access to a Shared Library, you specify that person’s e-mail address so he or she can be sent an e-mail invitation to download FolderShare and set up an account. You can substitute your own text for the two-sentence boilerplate of the message body, but the subject line’s fixed reference to your e-mail address can’t be modified. We wish it could, though, to minimize the chance that those using addresses unfamiliar to their recipients find their invitations inadvertently relegated to the spam bin.

When adding a user to a Shared Library you must also choose one of four permission levels — Reader, Contributor, Editor and Senior Editor. Readers can view files within a Shared Library but not add or modify them. Contributors gain the capability to add files, but still can’t modify or delete any. Editors get unrestricted file access, while Senor Editors get the added ability to change the library permissions of other users.

Even if you haven’t designated a folder as a Personal or Shared Library, you can still access its contents provided the system on which it resides is online and running FolderShare. When logged into the FolderShare site, a Remote access feature lets you browse the folder structure of any connected system much as you do when creating a Library, except that all the files are displayed and are downloadable. Accessing files this way simply creates a duplicate copy and doesn’t involve any synchronization, but it can be a handy way to get at distant files in a pinch.

While FolderShare does have some limitations and usability quirks, they don’t undermine the essential promise of the software. If you’re looking for a quick and easy way to share files on your own network or with others, Windows Live FolderShare 2008 is up to the task.