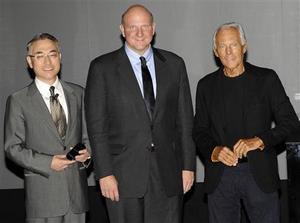 Remember Microsoft CEO Steve Ballmer’s famous jab at the iPhone when it first came out at a $500 price?

“… that is the most expensive phone in the world and it doesn’t appeal to business customers because it doesn’t have a keyboard,” said Ballmer.

Well it wasn’t really the most expensive phone in the world. In fact, Ballmer just endorsed another one costing $500 more — but hey, it has a keyboard.

Ballmer was on hand with famed Italian designer Giorgio Armani October 9 to help launch a new Armani-Samsung smartphone that will sell for 700-euro ($1,032) and will, of course, run Microsoft’s new Windows Mobile 6.5 software. It actually sports both a touch screen and keypad.

Samsung said the new Giorgio Armani-Samsung smartphone is “the most elegant and functional mobile on the market.”

The phone features what the Samsung said is a unique two step tilt hinge form factor with both full touch screen and QWERTY keyboard hybrid, and “a stunning 3.5 inch Ultra Brilliant AMOLED display.”

Next page: A look at the new Armani phone