Ossia is a fascinating company and technology. What Ossia sells is a wireless power solution that, unlike the inductive wireless technology currently being used for devices and electric cars, can transmit up to eight meters (around 26 feet). That’s roughly 20 feet more than the typical limits of inductive technology.

Ossia’s wireless power solution can’t handle the amount of power inductive charging can handle, at least not yet, and it doesn’t have the data capacity of Wi-Fi, but it does have enough capacity to keep larger devices mostly charged when not in use, and it can power smaller devices (switches, small LED lights, trackers and sensors) more completely.

Ossia is currently rolling out the technology, with the first products ranging from grocery store use (small wirelessly powered price and static information displays), cars (switches, sensors, and some low-powered devices), trackers (people/pets), and nanny cams (which will use Wi-Fi for the data channel).

I met with Ossia this week to learn about the technology’s potential. Let’s talk about what kind of revolution this could cause this week.

I have worked on cars my whole life and they have gone from being simple to incredibly complicated. They typically have a number of wired data networks and a power network, all moving over wires that can, if they are not properly set, short or break, causing a nightmare for a mechanic who must figure out where a problem – which may be initially intermittent – is located.

If you could take most of the stuff that is low-powered (switches, map lights, seat sensors, parking sensors, brake sensors, etc.) and power and connect their control interface and data sending capabilities wirelessly, you could massively reduce the labor cost to build and repair the car. In fact, I expect that in most cases you would just need to remove the non-functioning module, replace it and then authenticate it to the system.

One of the most annoying things about current cars is the TPMS sensors that monitor tire pressure. They use little power, but they eventually will run out, which causes you to get a low-pressure warning and forces an expensive trip to the store to get new sensors installed, often costing over $75 each, and you will need at least four of them. With Ossia’s technology, tire sensors would almost never run out of power for the life of the car.

Another place this has been a problem is removable seats in vans or SUVs that have occupancy sensors. If those sensors were wireless, you’d just need to pull out the seats. Right now, you also have to unplug them and, if you forget, you”ll either break the wires and damage the system, or forget to plug them back in, causing the system to misreport the related occupancy level (which could be problematic if you have a small child that unbuckled themselves prior to an accident).

In the home, the technology would indefinitely extend battery life for remote controls and keep your pet’s tracker charged in case he or she wanders out of the house. Right now, if you have that tracker on the charger or the battery has gone dead, you are out of luck if your pet escapes when someone forgets to close a door, jumps a fence, or it just sneaks out. 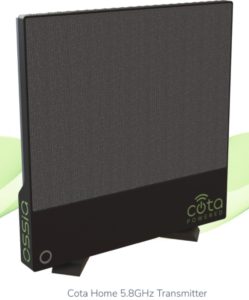 This would also work great with tile-like products used to track things inside your home, like your keys or phone, which again, if the tile battery is dead when you misplace the item, good luck. Ossia’s technology would prevent that dilemma.

Keypads and other critical controls wouldn’t have batteries dying at inopportune times. Dare we dream of smoke and carbon monoxide detectors that don’t run out of batteries in the middle of the night?

Finally, and this is a personal annoyance, you can use this to power your wireless drapes or shades by making sure both the switch and the shades or drapes stay charged, avoiding the need to replace the batteries or having to hire an electrician to wire them to power. (My outside shades are hardwired but use wireless switches, but my inside blinds are battery- powered at both ends, and they are a pain in the butt to change.)

The most exciting uses could be in the enterprise, where Ossia’s wireless power could be used for occupancy sensors to keep electrical bills down, for battery-powered charging cradles, electronic locks (using a capacitor for locking and unlocking, which also works in cars as well), for switches (you could eliminate the wiring between the switches and the lights, and configure both logically without wiring them together), and to keep things like cell phones, headsets, wireless keyboards and mice endlessly charged.

Factory sensors and control systems, IoT devices, HVAC controls, and a variety of other low-powered devices that currently use power could evolve to be fully wireless.

In medical facilities, most of the sensors, monitors, alarms, lighting controls, some of the lights and low-powered medical devices would never need batteries or hard wiring anymore. And battery powered devices that are only used occasionally could move from batteries to capacitors or just be powered by the new wireless network.

Once deployed, Ossia’s technology could massively reduce the amount of toxic battery waste going into landfills, reduce the cost and annoyance of replacing most batteries, make trackers far more reliable, cut the cost of wiring homes, vehicles, and other complex passenger or freight types of uses.

It could help keep our robotic devices (robot vacuum cleaners and lawn mowers, for example) charged, and it could assure your pet tracker and phone, or even PC, are never undercharged. Even laptops could get away with much smaller batteries while maintaining the same unplugged power life. Imagine a digital assistant, security camera or nanny cam that you would not have to wire or ever change the batteries.

That last use suggests we may need some security controls because it would also make it easier to slip a powered wireless microphone or camera into any area covered by an Ossia transmitter.

This week I saw the coming future of wireless power at scale. Nikola Tesla would be proud.

Read next: Wyebot: The Increasingly Automated Solution for Wireless Networking