Dirk Hohndel has been a fixture for years at open-source conferences, always delivering wisdom. Since October 2001, Hohndel has been the Chief Linux and Open Source Technologist at Intel, prior to that he was 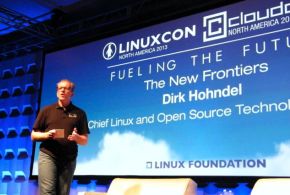 VMware isn’t a company that is well known for its open-source contributions. Yet it’s important to note the incredible impact that VMware has had on the open-source cloud community as one of the original instigators of the OpenStack Quantum (now called Neutron) networking effort.

VVMware is now also increasingly building on open-source in the container world as well and it makes sense that the company would seek out the brightest and the best to help it set direction.

At VMware, Hohndel will rejoining Pat Gelgsinger, the current CEO of VMware, who had previously spent the bulk of his career at Intel as well – so there is some familiarity there for sure.

V “As VMware broadens its ecosystem from traditional engagements in the data center space to areas such as software-defined networking and Cloud Native and mobile app technologies, we have been releasing more and more of our new offerings as open source software,” Ray O’Farrell, executive vice president and Chief Technology Officer, VMware said in a statement.

Sean Michael Kerner
Previous articleRed Hat Summit Hosts a Wedding – for Real. #RHSummit
Next articleOpenStack Pico and Questa set to Debut in 2017 and 2018.