The bulls just keep running here, pushing one index after another to new or multi-year highs. We’re in a seasonally weak period for the next three weeks, so some kind of pullback could materialize soon, but Oct. 30 begins the strongest period of the year, so if the S&P 500 is going to clear its all-time highs by a substantial margin, the stage is set. That said, this remains an area of no small importance: any remaining notion that the broad market could still be in a long-term bear market off the 2000 peak lives and dies with the S&P’s 2000 peak, and the bulls appear poised to take that level. That’s no small victory in the big picture if they can pull it off.


The NYSE advance-decline line (see chart below) continues to lag, but is at least headed in the right direction and appears to be accelerating, showing gathering strength in the broader market. In short, a solidly positive technical picture for now, but sentiment could pose a near-term problem for the market, perhaps leading to a high of some significance later this year or early next if the technicals begin to erode. The S&P’s all-time high may yet turn out to be the level that finally generates enough bullish sentiment for a major top. We will keep you updated as market conditions change. 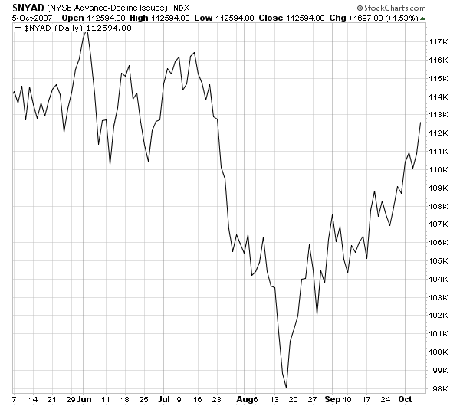