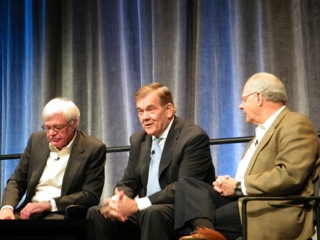 During a panel session at the RSA conference this week, Tom Ridge, the first head of the U.S. Department of Homeland Security, recounted the efforts that he helped lead 10 years ago. Ridge was joined by Howard Schmidt, who helped author the U.S. National Strategy to Secure Cyberspace under President Bush. More recently, Schmidt served as the cybersecurity coordinator of the Obama Administration.

“10 years ago, we started a national strategy to secure cyberspace. This was during the first several months post-9/11 and we were concerned that cyber attacks at that time were imminent,” Ridge said.

Ridge stressed that the U.S. government in general, and in particular in the most recent Congress, has been talking about cybersecurity for a long time.

“It’s good to talk about,” Ridge said. “But it’s time to quit talking and start doing.”