No, I didn’t attend the massive Hollywood premiere of Star Wars The Force Awakens last night, though I wanted too. Like make others, I watched the StarWars.com live feed of the red carpet and tuned into to multiple Periscope feeds as they popped up. 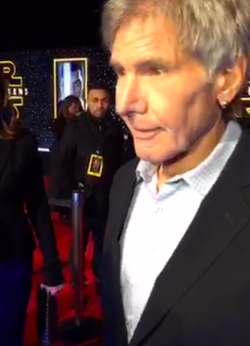 With such a massive premiere (all three big theaters on Hollywood Blvd) and thousands of people, I had expected that leaks would emerge, footage would be on the Internet and we’d have instant spoilers.

Disney deployed what must have been the largest security cordon ever in the history of film for the Star Wars The Force Awakens premiere. In addition to the physical security element you’d expect, Disney also required film-goers to give in their cell phones in a bid to prevent leaks.

Going a step further, all reviews of the movie are strictly embargoed until Wednesday (that’s tomorrow!).

In a world (Earth) when hackers were able to infiltrate Sony Pictures, leak films emails and everything else, Disney has the audacity to ask for and get an embargo from over 5,000 premiere attendees not to leak an image or a word that could spoil the new movie.

It’s a security permiter that Darth Vader’s Empire could learn a thing or two about. After all, Vader was unable to defeat a rag tag group of rebels from infiltrating and then ultimately destroying his prized critical infrastructure that we know as the Death Star.

No doubt, some spoiler will emerge late today (they always do) but the big leak, from the big premiere didn’t happen. While I often write about security breaches, this is a case where there was no breach, as the Force Awakens and we will all soon be able to return to that place a long time ago in a galaxy, far, far away.