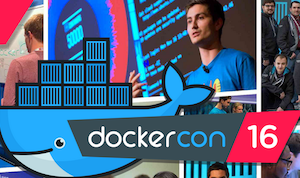 This particular Dockercon will be a major event, larger than any other prior Docker event anywhere in the world. But size alone isn’t what anyone should judge the success of an event about – it’s the quality of speakers and sessions that truly matter.

For me, an obvious highlight is the opening (and closing) keynotes. Solomon Hykes is a developer’s developer and is always a joy to hear him speak about Docker and the broader world of development. No doubt, Docker CEO Ben Golub and Hykes will have some ‘stories’ to tell in the opening keynotes of Docker success and no doubt there will be some announcements too. But what sets aside the Dockercon keynotes from every other conference I attend is the daring of keynoters to constantly challenge the demo gods, and perform live demos.

At the Dockercon EU event in Barcelona, one such live demo was that of Dockercraft – a Minecraft, Docker management mashup that was part of the closing keynote. I don’t have any insight into what demos, we’ll see this time around, but I am prepared to be amazed.

Beyond the keynotes, the width and breadth of interesting sessions is staggering. On the security front a couple must see sessions for me include: The Golden Ticket: Docker and High Security Microservices, Using the SDACK Architecture on Security Event Inspection and of course the Docker Security deep dive with Director, Docker Security, Docker, Nathan McCauley.

There are also all the usual ‘meet the maintainer’ talks, how to contribute stuff and talks on why open-source is goodness. I’m also personally very interested in Containerd, which is a container supervisor technology that I don’t quite understand (yet).

As a networking person (after all without a network what do you have? really? just a local machine – long live the network!), lots of interesting talks including Docker for Ops: Docker Networking Deep Dive, Considerations and Troubleshootingwith Madhu Venugopal Senior Director, Networking, Docker – who quite literally is Mr. Libnetwork.

I’d be remiss if i didn’t mention my own session session on Tuesday at 11:15 with my friend Frederic Lardinois of TechCrunch fame, Alex Williams the dude that started and leads The New Stack and of course the best analyst (that I know) in the world covering containers today – 451 Group’s Donnie Berkholz.

Bring your questions and join a panel of top media and analysts covering containers for what is expected to be a truly informative and interesting perspective on Docker, the container ecosystem, and best (and worst) practices when talking containers.

Then of course, there are the *wildcards* sessions/vendors/people that I’ll run into that will change my perspective on something and the wide world of containers. At Dockercon 16, my personal plan is simple – I want to Docker all the things.