SEATTLE – Dockercon the primary conference for Docker container has a three year old tradition of appeasing the demo gods prior to any live demo – and Dockercon has lots of live demos. 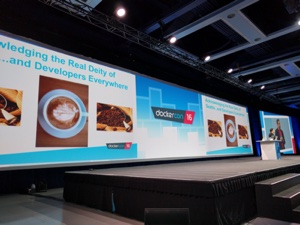 At Dockercon EU the gods were appeases with an offering of grapes – so any and all people doing demos ate a grape (or two) before going on stage. At Dockercon 16 today in Seattle, Docker Inc CEO Ben Golub announced the offering in Seattle – and no it’s not grapes.

That’s right, prior to every live demo, the person doing the demo takes a shot of espresso.

What a great idea. As an admitted caffeine addict, this is an idea that appeals to me on so many levels, but it also makes sense. A quick shot of caffeine before doing a demo will at the very least make sure the presenter is awake.

Coffee as we all know is the real ‘deity’ of developers everywhere..