Docker Store Announced @dockercon / So What Happens to Hub? #dockercon 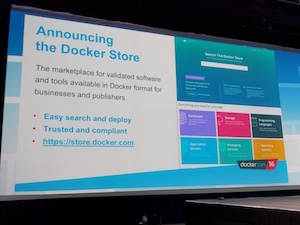 container apps, Store is something different, in that it’s all validated images and included both open-source and commercial tools.

Docker Store builds on the Official Images and the popularity of the Docker Hub for community content by providing an official marketplace that provides workflows for those who wish to create and distribute content and those that wish to download content to build their applications.

Personally I’m not surprised, it makes sense to have an ‘app store’ with a revenue model for validated apps and that’s the promise of Docker Store – no doubt though it will lead to confusion with Docker Hub.

The Docker Store is an invite-only beta now available at: store.docker.com.