Linux SystemD Wins Pwnie Award at Black Hat, and No It’s Not a Good Thing

LAS VEGAS — Some awards are better than others. When it comes to security awards, the Pwnie Awards can sometimes be a good thing to win and other times – not so much. 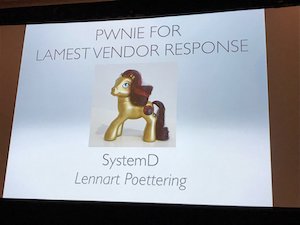 though I suspect it’s not award that anyone that likes SystemD would be proud off.

SystemD and its lead maintainer Lennart Poettering won the 2017 Pwnie award for the lamest vendor response.  Apparently, the SystemD maintainer didn’t respond favorably to a security bug report and that’s what led to the award.

Well that and the fact that it was painfully obvious that none of the judge of the judges for the 2017 Pwnie Awards had any love for SystemD – at all.

Other winners at the 2017 event, include the unknown authors behind WannaCry and the ShadowBrokers hacker group who both won in a tie vote for epic 0wnage category.