Compex isn’t a big name player
here in the States. Their prices are good though, and hardware is nicely put
together. Unfortunately, while general setup of a 802.11b wireless network using
the Compex kit is easy, the inconsistencies in their software make WEP enabling
difficult for anyone but the most knowledgeable of users, not to mention the
significant hit in performance.

View a summary of the WLU11
USB adapter’s capabilities. 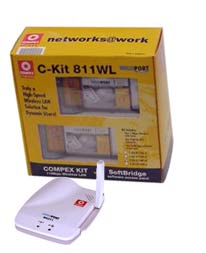 Setup couldn’t be easier with either the CardBus or the USB adapters. Plug
them in, let the Windows Add New Hardware Wizard look for the drivers, and you’re
up and running. You’ll then want to install the accompanying utility software
that comes with each adapter for configuring the Ad-hoc (peer-to-peer) or Infrastructure
(with Access point) settings, as well as WEP.

Of course you’ll need to set up the networking control panels on each system
with IP addresses and so forth. Compex doesn’t provide utilities for that step,
but does go into it in the documentation. In fact, when setting up the SoftBridge
access point software, the instructions are very particular because you have
to make sure that TCP/IP is not bound to the Compex card on that system-only
the Ethernet card connecting it to the wired network.

Big pet peeve: Compex ships all drivers and utilizes with the 811WL kit on
floppy disk, which is useless if you’ve got a laptop with no A: drive (like
me). It didn’t really matter too much though, as the driver was already out
of date for the PC Card: download driver version 1.29 from www.cpx.com to get
going.

The WavePort C-Kit 811WL has two options: set up two systems with the two included
811WL-U PC Cards using the ad hoc sharing, or set up one system as wireless
only with a second using the 811WL-U PC Card along side a wired Ethernet card
in a system that will bridge your wired Ethernet network to the wireless system
or systems.

The second option is to setup Compex’s SoftBridge software access point on
a system connected to your wired network, and it will facilitate sharing between
the wired nodes and the wireless nodes. However, any shares you have set up
on the SoftBridge system will not be available to any other system on the wireless
side of the network.

Wired
clients can see the SoftBridge system’s shares fine, but if WEP is enabled,
the wireless clients become invisible to the wired, and vice versa. WEP is supported
at 64-bit and 128-bit by all the clients, but the utility software for the USB
adapter (right) does not support passphrase WEP key creation – an annoying discrepancy
since the utility that comes with the PC Cards does.

The following shows testing results using Qcheck.
With the Compex SoftBridge software access point set up on a laptop connected
to the wired network via a 10/100 switch, we tested traffic between a Windows
2000 desktop system with the Compex USB client adapter and a Windows ME laptop
with the Compex PC Cardbus adapter. This test was done using Channel 5 and with
WEP encryption disabled and enabled as indicated.

The 811WL kit is worth a look if you’ve got one laptop you’d like to have mobile
while sharing resources on your wired network. Otherwise, you’ll want to hold
out for an access point unit.

Want to talk about it? Use the Forums.